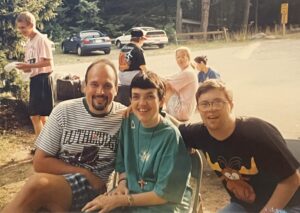 Craig Nelius never looked back! His first week on summer staff at Lutheridge in 1989 with Summershine campers changed the direction of his life. Craig came to staff that summer as an engineering major. He left planning to become a Special Education teacher. That’s been his life’s work ever since! He has no doubt that’s the way God wanted it to be.

Tennessee native, Craig entered the University of Tennessee-Knoxville at the age of 17, to become an engineer. “That first year of study didn’t go well,” he recalls, “so I had to come home to community college for my sophomore year.” Christmas of that sophomore year, his pastor hosted a holiday dinner for students. There, Craig recalls, the pastor talked about the value of summer camp work and gave each of the students a flyer about becoming a summer camp counselor at Lutheridge. “I had never been to camp,” Craig admits, “and I doubted my parents would want me to go that far away for summer work. To my surprise, they encouraged me to apply! I made a half-hearted application, did a phone interview and so was shocked to be offered a position for summer camp 1989.” (Craig pictured here as a counselor in the early 90’s)

He remembers staff orientation and a form to list areas of interest and service. “It was all new to me,” he confesses, “including working with special needs campers. But there I was, my first week as a camp counselor – working with Summershine campers! I went into that week thinking, ‘what can I do for them?’ I came out of that week thinking about what they did for me.” Summershine is one of Lutheridge’s very popular programs for many years now, offered for teens (ages 15 and above), and adults with developmental disabilities. For many of these special campers, Summershine is the highlight of their year. For many donors, this program is the focus of their giving, providing funds for scholarships and program support. Craig returned to work with Summershine campers (and others) from 1990-92 and again in 1997, serving as the Summershine Area Director. 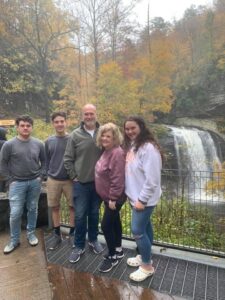 Craig left at the end of summer camp 1989 to return to UT-Knoxville where he changed his major to Special Education, and went on to earn a Master’s Degree in Special Education in 1994. That’s been his life’s work since graduation, and he’s still at it – an Elementary School Special Ed teacher (and loves it). “None of this was by coincidence,” Craig says. “I can see God’s hand at work through all of this – including an introduction in 1998 to a Speech Therapist at the school where I grew up whose middle name was Arden!” Leslee and Craig had 23 years of marriage, three children, and companion careers before cancer took her life in September 2021. During her four-year battle, he remembers, Leslee didn’t let her illness slow her down or change her attitude, and prompted her at times to say, “How can I be so sick and feel so good?”

But God wasn’t through. This summer, following Leslee’s death in September, Craig inquired about the possibility of volunteering at summer camp. He and his daughter, Grace (middle name Arden!) were June volunteers at Lutheridge, Craig as the Lineberger Dining Hall manager and Grace in a variety of roles. His volunteering provided a ‘mini-reunion’ with two other summer camp volunteers who were counselors with him in 1989, Susan Wilhelm and Jenny Simmons. “It feels like home. It feels like family”. For so many Lutheridge is a special place to be – when things are great in your life and when you’re living with grief and loss. Summershine campers know that too! 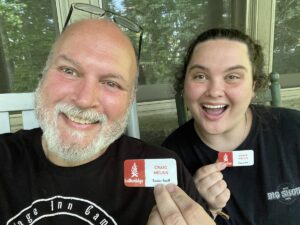 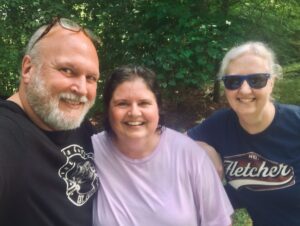 To learn more about our Summershine program for teens and adults, visit our website at www.novusway.org.

To make a gift to support this very special ministry – or any other area of our faith-forming ministry, donate at our website or mail your gift to us at