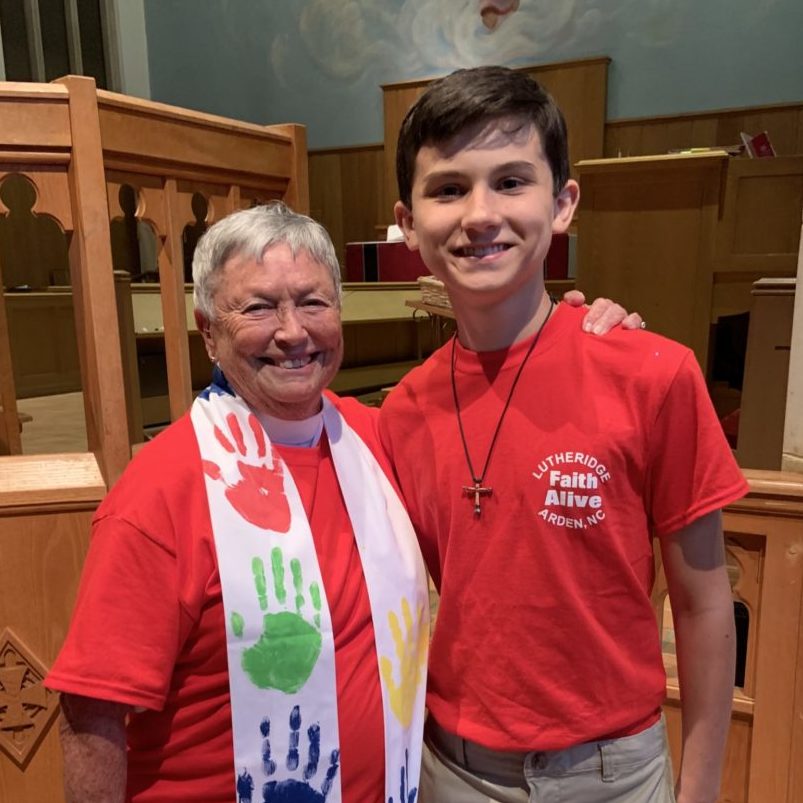 Sol Eure, a senior at Appalachian State University, was a Lutheridge camper for 14 years starting in Pioneer A as a third grader. “The first time I had friends was at camp,” he said. So, in 2017, he didn’t hesitate to apply to serve on summer camp staff as a counselor. He returned as a counselor in 2018 and then came back this past summer to teach Bible study for campers as a C3ARE leader. While these were formative and important times for Sol, the relationship he built with the confirmands from Incarnation Lutheran Church (Columbia, SC) through the Faith Alive program, had a special level of meaning for him.

“I worked as a counselor for every Faith Alive for two years,” he said. Faith Alive is offered four weekends every year with seven different themes. As a compelling addition to a congregation’s confirmation program, it provides experiential education and faith building relationships between campers and counselors. Sol was paired with the confirmands from Incarnation for eight of the times he served as a Faith Alive counselor. “I got to know them better each time, and I watched the majority of their confirmation journey.”

Early this summer, he was shocked to receive a text message from Incarnation’s interim Pastor Jane Mitcham asking if he would surprise the confirmands on the day of their confirmation. He was delighted to say yes.

When Pastor Mitcham arrived at Incarnation, scheduling confirmation was a struggle. “Their schedules are so full,” she shared. It was difficult to find a consistent time to gather all the confirmands and do a quality program. She turned to Faith Alive as an option and the parents loved the idea.

“Faith Alive has been vital to our   confirmation ministry,” said Pastor Mitcham. “I love that the youth are learning from other young clergy like Pastor Josh Turner and Pastor Micah Kearny. It gives the confirmands exposure to our camping ministry, exposure to the wider church and assures Luther’s catechism is learned.” The confirmands returned from Faith Alive each time to share their witness from the weekend with the congregation. “This sharing has encouraged the congregation to better support the confirmands, because they can see the excitement from the youth.”

The confirmands made Pastor Mitcham a stole for confirmation Sunday. They all wore their red confirmation shirts and were shocked when Sol came out to read the day’s scriptures. Together,  during worship, they taught the congregation the motions to the Apostle’s Creed they learned at Faith Alive camp.

The small group relationships built during Faith Alive are carrying onward for the youth of Incarnation to impact their church. The excitement they return with flows from them into their congregation. “Without Faith Alive, Incarnation’s confirmation program would lose its invitation to learning what it is that we believe and the excitement for learning it,” said Pastor Mitcham.

To learn more about Faith Alive or to register confirmands from your congregation, visit www.novusway.org or call 828-684-2361.